Ticket Collection
All advance bookings can be collected from the Self Ticketing Kiosks located in both the State Cinemas Nelson and Suter Art Gallery foyers.

Refunds
Please note: NO REFUNDS will be given for uncollected tickets or tickets collected late. Bookings once made cannot be altered. Please choose carefully as there are no exchanges or refunds except as required by law. Refunds may be authorised for COVID-19 related reasons.

The Resene Architecture & Design Film Festival is coming to the Pastorius Waller Theatre at the Suter Art Gallery for the first time! This is the 11th year of the festival, one of the largest of its kind in the world, and we will see a range of architecture and design films - from small builds, to beautiful landscapes, to unique biographies of phenomenal artists.

Thu 26 May   - Architect of Brutal Poetry
Fri 27 May     - Inside the Uffizi
Sat 28 May   - Grethe Meyer: The Queen of Danish Design
- MAU
- McCurry: The Pursuit of Colour
Sun 29 May   - Maija Isola, Master of Colour and Form
- Building Bastille — The Improbable Story of the Paris Opera
Mon 30 May - Mud Frontier: Architecture at the Borderlands
Tue 31 May  - An Other City
Wed 01 Jun  - Holy Frit

The team at the French Film Festival Aotearoa are proud to present the L'OR FRENCH FILM FESTIVAL AOTEAROA for 2022!

With a line up of 21 fantastique French Films - there is something to excite, delight, and entertain every member of the family! From murder mystery, to romance, comedy, and thrilling action - the FRENCH FILM FESTIVAL AOTEAROA 2022 is your must-see event of the year!

Also on offer, is the phenomenale Opening Gala Event - screening A MERMAID IN PARIS on the 8th of June @ 7pm. Join us to celebrate the opening of the FRENCH FILM FESTIVAL AOTEAROA 2022 - and mix and mingle with likeminded cinephiles and Francophiles!

Doors open from 6:00pm and tickets include complimentary food and beverage.

Tickets on Sale Now at State Cinemas, and online at the Suter Booking Site Here's the news you've been waiting for – Whānau Mārama: New Zealand International Film Festival will be going ahead in July/August 2022 in 13 towns and cities.

The film festival will open in Auckland at the majestic The Civic on July 28, with Wellington opening the following week, Christchurch and Dunedin opening on August 11, with the regions – Hamilton, Tauranga, Hawke's Bay, New Plymouth, Palmerston North, Masterton, Nelson, Timaru and Gore – to follow. Details of the regional festivals are still to be confirmed.

Keep an eye out for the return of more NT Live screenings.

The 15th season of Live in HD kicks off with the epic Boris Godunov, starring the great German bass René Pape as the tragic tsar at the centre of Mussorgsky’s masterpiece. Followed by historic Met premiere of Terence Blanchard’s Fire Shut Up in My Bones, the first opera presented at the Met by a Black composer, based on the New York Times bestselling memoir by Charles M. Blow. Later Tony Award–winning director Bartlett Sher creates a bold new take on Verdi’s timeless tragedy Rigoletto. In exciting news for the first time in company history, the Met presents the original five-act French version of Verdi’s epic opera Don Carlos, in which Met Music Director Yannick Nézet-Séguin leads a starry cast.

Impress your clients or reward and motivate your team with an exclusive movie event! You can host your next event at the Suter Theatre in Bridge Street or if our programming allows at State Cinemas.

A movie night is a flexible fundraiser that can be tailored to meet your club’s needs. Very simply, the plan is to encourage attendees to watch a movie together and utilise the gathering to raise funds for your club. A club can aim to make money off the movie tickets, the food and catering or upon raffle tickets sold on the night. 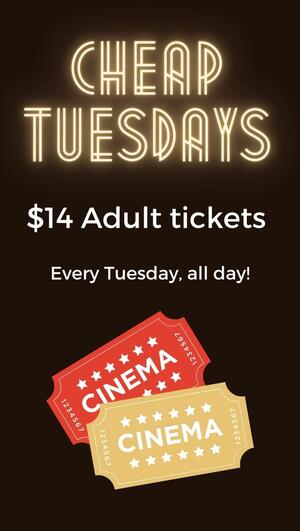